Mrs N and her 16-day old male baby S came with the father, Mr I, to our hospital-based lactation clinic because the baby was not gaining weight well. She was a teacher and was on maternity leave.

The baby was born term and healthy through vaginal delivery at another hospital on September 23rd 2020. His birth weight was 3240 grams, and the mother has breastfed her baby right after birth. Supported by her husband, the mother intended to breastfeed her baby for two years. She was concerned about the importance of breastfeeding and breastfeeding difficulties, including ankyloglossia, from her experience. During her second pregnancy, she got a breastfeeding session with doctor R (a doctor and breastfeeding counsellor). Despite correct positioning, the mother experienced painful sore nipples and blisters of the nipples. Because of that, she reached doctor R as early as two days after delivery. At this point, doctor R advised her to come to our hospital-based lactation clinic as the underlying cause of the breastfeeding difficulties might be ankyloglossia.

Thus, the mother came to see doctor R at our hospital. Her two-day-old baby weighed 8,4% under his birth weight and showed a poor latch during breastfeeding. Through a physical examination, the doctor confirmed the ankyloglossia and incised it. Advanced breastfeeding techniques and adequate aftercare optimized the frenotomy procedure. The aftercare consisted of tongue and lip exercise (for the following three weeks), tummy time, topical use of aloe vera gel at the incision site.

Four days later, they revisited doctor R for a follow-up. The six-day-old male baby gained weight well after frenotomy (39.5 grams/day) and weighed 3123 grams. Mother’s sore nipples have healed; thus, she could comfortably breastfeed her baby. The schedule for the next follow-up visit was three weeks after the frenotomy procedure. However, they came a week sooner, when the baby was 13 days old. The mother was afraid that her baby might not get enough milk due to decreased milk production. The baby frequently seemed unsatisfied despite good suckling and proper breastfeeding attachment. He gradually became lazier to feed and also sleep at the breast. His weight gain was significantly lower than expected (16 grams/day), weighed 3235 grams. The doctor explored the possible additional health problems and was concerned about the wide scar on the edge of the areola on both mother’s breasts. The mother has gotten those scars from previous breast surgery for removing a benign mass. Therefore, doctor R immediately advised them to see doctor A (an experienced paediatrician and international board lactation consultant) for further assessment and treatment.

Three days later, they visited doctor A by referral from doctor R. The baby was 16 days old. Doctor A explored the past medical history and found that:

The mother had breastfed her first child (the baby’s elder sister) for two years despite many struggles and difficulties. The elder sister – two years and two months old toddler – had poor nutrition at the initial visit to doctor A back then. The sister had managed to be breastfed and had gained weight well after undergoing frenotomy, using at-breast supplementation named SNS (Supplemental Nursing System) and adequate complementary feeding. The sister had not been having any issues. She was weaned at the age of two when the mother was expecting the second baby.

The mother had suffered from 11 lumps in both breasts when she was a teenager; thus, she had to undergo surgery. The incision site has been on several areas of the breast, including wide ones at the edges of the areola (peri-areolar area). It might cause the mother’s lower milk supply when she breastfed his first child. Physical examination revealed wide periareolar scars at the lower quadrant of both breasts, as seen in the picture below.

The baby’s weight is not gaining weight well. Fortunately, according to the anthropometric chart, he was on a good nutrition status (according to the anthropometric chart). The baby could make a proper breastfeeding attachment from the examination yet could not maintain it. He fell asleep frequently during breastfeeding, and the mother experienced a painful nipple like before. There was a reattached ankyloglossia. The mother felt stressed due to those problems. The doctor confirmed that the main problem was the reattached-ankyloglossia worsened by wide peri-areolar scars.

We did multimodal management, including improved breastfeeding counselling and techniques, re-incision of the ankyloglossia and aftercare, at-breast supplementation, and giving the mother galactagogue. When the baby was four months old, we advised early complementary feeding to stop formula milk use while maintaining the baby’s good weight gain, growth, and development. The dyad regularly visited our team at the hospital. The mother breastfed her baby well and weaned him right after his second birthday. His health, growth, and development have been good when we write this case report (with their permission).

Ankyloglossia is a medical term of the generally known ‘tongue tie’. It is a congenital condition where the frenulum of the tongue is too tight; the reported incidence of ankyloglossia is up to 10.7%.1,2 It causes restriction of tongue movement, which can cause difficulty in breastfeeding. Tight frenulum of the upper lip is frequently present along with ‘tongue tie’ and may cause other health problems such as spaced teeth, speech difficulty or eating problems. Frenotomy is a simple incision procedure of the tight frenulum to correct both conditions.

The tongue itself is a complex organ consisting of 8 muscles involved in eating, breathing, speaking, sleeping, posture, and other essential functions. According to IATP (International Affiliation of Tongue-Tie Professionals), the lingual frenulum is a remnant tissue in the midline, between the under-surface of the tongue and the floor of the mouth.8 The prevalence of ankyloglossia is 3.2% to 10.7%.2 Ankyloglossia is more frequent among boys than girls. Several studies have shown that ankyloglossia involves autosome genetic factors.6,7 However, several studies investigated that the genetic inheritance of ankyloglossia is genetically X-linked.8 The majority of ankyloglossia presents as a single problem. However, it can also be associated with other events, such as X-linked cleft palate, Kindler syndrome, van der Woude syndrome, Opitz Syndrome,3 Orofaciodigital syndrome, Beckwith-Wiedemann syndrome, Simpson-Golabi-Behmel syndrome9 and Pierre Robin Syndrome.10

The tongue develops as a restricted, indented tissue around the fourth week of gestation. As it grows, the tissue that forms the tongue’s restriction disappears gradually through ‘apoptosis’. Ankyloglossia occurs due to disturbances during this embryological process.11 Multiple factors may interfere with programmed cell death or apoptosis, including epigenetic, environmental, and physical injury during embryonic development.7 Regarding genetic mutations, two genes have been associated with childhood ankyloglossia:

1) TBX22 gene mutation, which causes tongue-tie without the syndrome; and 2) The absence of the G-protein-coupled receptor (Lgr5) gene causes a tongue tie phenotype and causes death within 24 hours due to feeding difficulties. However, further studies in humans are needed.

Epigenetic factors associated with ankyloglossia include the DNA methylation process that affects the normal facial formation during embryo formation. This process is susceptible to stressors, such as viruses, chemicals, drugs, nutrition, and stress.11 An example of a nutrient required for DNA methylation is folate.6 However, no studies have proven a definitive relationship between folate deficiency and the occurrence of ankyloglossia. Folate supplementation can be folic acid (folic acid) and from its natural form, 5-methyltetrahydrofolate, which is more easily absorbed and has better bioavailability. For the metabolism of folic acid to 5-methyltetrahydrofolate, the enzyme MTHFR (Methylenetetrahydrofolate Reductase) is required. There can be problems with folic acid metabolism in populations with MTHFR polymorphisms, which may interfere with the DNA methylation process.6 Thus, using the natural form of 5-methyltetrahydrofolate is preferable to folic acid.13 However, according to the Centers for Disease Control and Prevention (CDC), patients with MTHFR polymorphism can still use folic acid, but at a slower rate, so it is still recommended to use folic acid supplementation.

Symptoms caused by tongue-tie do not only appear in infants but also mothers. The common symptoms among breastfeeding mothers whose baby has an ankyloglossia are painful and sore nipples. Other symptoms are ineffective breast emptying and breast infections. Symptoms that may arise in babies including: 2,15,16

On the other hand, breastfeeding problems lip ties may worsen those symptoms. A lip tie is a string or frenulum (only a membrane) at the top of the lip that attaches to the upper jaw, and it can cause limited movement of the lips during feeding. Proper lip position is needed to secure a latch and create a vacuum inside the baby’s mouth and stimulate the mother’s oxytocin. This process will retrieve breastmilk from the breast well. Improper breastfeeding attachment due to lip-tie may cause sore and painful nipples.

Breastfeeding management requires a comprehensive approach. The doctors and counsellors must see the case from multiple perspectives about the mother, baby, and surrounding environment. Therefore, in solving the problem of lactation, these three components must always be considered and evaluated. For the cases involving ankyloglossia, we do not just do the frenotomy yet neglect other aspects, and instead, we have to look holistically at:

Among older children, we have to explore the history more as they may have had problems with eating, speech, and other daily activities affecting their quality of life.

God gave mothers a pair of breasts prepared for breastfeeding after giving birth. Each breast consists of many grape-shaped alveoli, hollow sacs that produce and store milk. They disembogue into lobule and further into bigger units called lobes. The ducts connected the lobes into the opening at the nipples in the middle of a dark area of breast surface called the areola. The fat tissues lie between the lobules and the milk ducts. Some muscles cover the ribs under the mother’s breast. Each breast contains blood vessels and lymph vessels connected to a lymph node. These lymph nodes lie in large numbers under the arms, above the collarbones, and inside the chest. They are also present in many other parts of the body.17 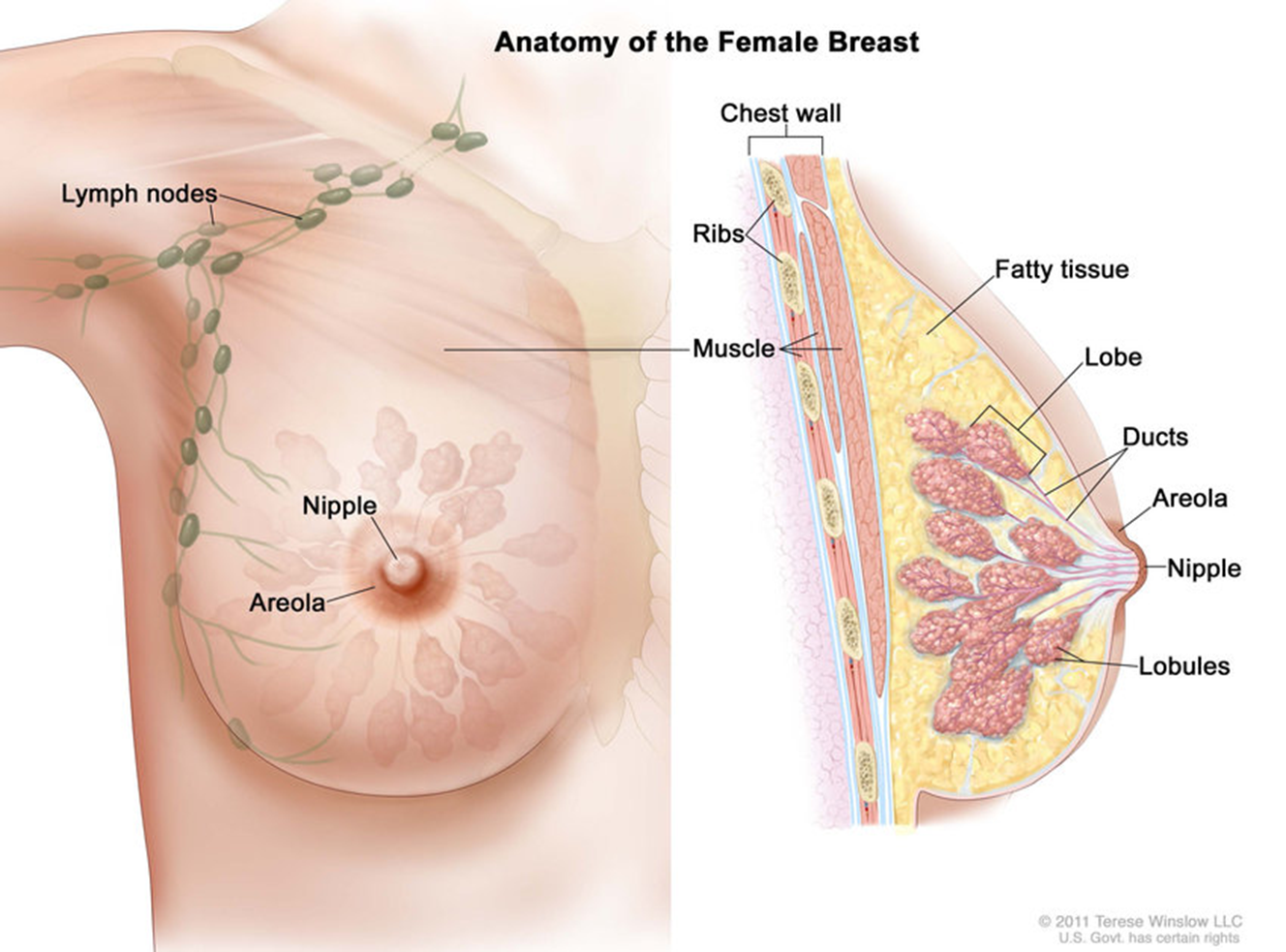 Breastmilk production or so-called lactogenesis begins during pregnancy. The first stage starts at 16-20 weeks of gestation, in which the milk ducts begin to form. There is a notable increase in breast and nipple size and areola change (it darkens and widens).

In the case above, the baby’s poor weight gain may be due to insufficient milk intake. The possible cause is that the wide perioral incision of past surgery affected the milk duct structure. Therefore, we must give additional milk intake through at-breast supplementation named SNS (Supplementation Nursing System) to support the growth and development and maintain breastfeeding until the age of two. In this case, mothers with extensive bilateral peri-areolar scars could continue breastfeeding for up to two years through comprehensive management. Moreover, she managed to do that for two children.